In many ways it is a uniquely Canadian success story: Two hardworking childhood friends from immigrant families, growing up in the melting pot neighbourhood of North Edmonton and eventually realizing their dreams decades later thanks to a common passion for Latin food, music and culture.

Christian Mena and Adelino (Lino) Oliveira, co-owners of an ever-growing Edmonton company that includes their flagship SABOR restaurant, had both arrived in Canada in the 1970s with their families — Mena from Chile and Oliveira from Portugal — and soon began a career journey that would include stops as diverse as the musical theatre stages of Los Angeles and the small coastal towns of northern Portugal. But as hardworking kids with a dream of someday opening their own restaurant, Mena’s and Oliveira’s journey first began as so many do in the Canadian restaurant industry — on the ground floor.

“We cut our teeth as kids bussing tables and washing dishes in some of Edmonton’s iconic restaurants like the (now defunct) Victor’s, Café Select and La Boheme, which at the time were known to be hotspots in the glory days of Wayne Gretzky and the Edmonton Oilers,” says Oliveira. “Fittingly, La Boheme happens to be across the street from our newest property, BODEGA Tapas & Wine Bar, in the Highlands neighborhood.” 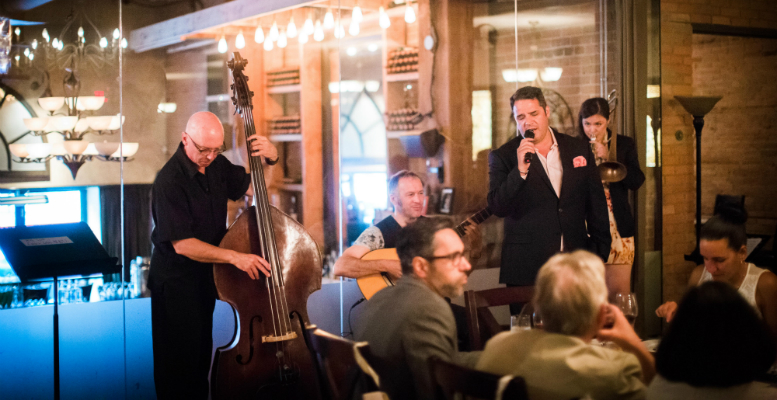 In the early 90s, Mena had decided to follow his musical roots and was lead singer of a Latin-pop-funk band called Maracujah. He then moved to Los Angeles to pursue his musical career in a Broadway touring production of Rent. Meanwhile, Oliveira and his wife Debbie had moved to Portugal to follow their love for food, be closer to his family and learn from his Portuguese heritage.

“We opened a restaurant on the country’s north coast where I developed my cooking techniques by learning from locals and perfecting my family’s traditional recipes,” says Oliveira. “There was a lot of trial and error, but a lot of success, too.”

In 2007, the downturn in the European market, along with encouragement from Mena, who had returned from L.A. to raise his family in Edmonton, lured Oliveira and his wife back from overseas. Mena and Oliveira decided it was time to open a restaurant — the one they had been dreaming about since they were kids washing dishes and mopping floors. In 2008, the pair opened SABOR DIVINO in the heart of downtown Edmonton in the historic Boardwalk building. In 2015, they gave the space a refresh and re-branded to SABOR.

“Although neither Christian nor I have formal training in service or cooking, we draw from the many talented servers, bartenders, and chefs we have worked with over the years, along with our own personal experiences,” says Oliveira.

Those personal experiences included a common passion for food, entertaining and culture. But despite their shared interest in opening a restaurant, Mena says the two friends were originally drawn to a foodservice career for different reasons.

“For me, there were a number of reasons—I was in a band and the hours as a server offered a lot of flexibility when it came to needing time off for touring,” explains Mena. “It also offered a decent living and was an industry that was full of other musicians, actors, and creative individuals that understood and supported my dreams in the music industry.

“Lino always enjoyed the creative freedom cooking and restaurants offered him—he’s really multi-talented. Kitchens gave him an avenue to follow and share his creativity. He really loves to share dishes with friends and strangers that showcase his heritage and passion for food.” 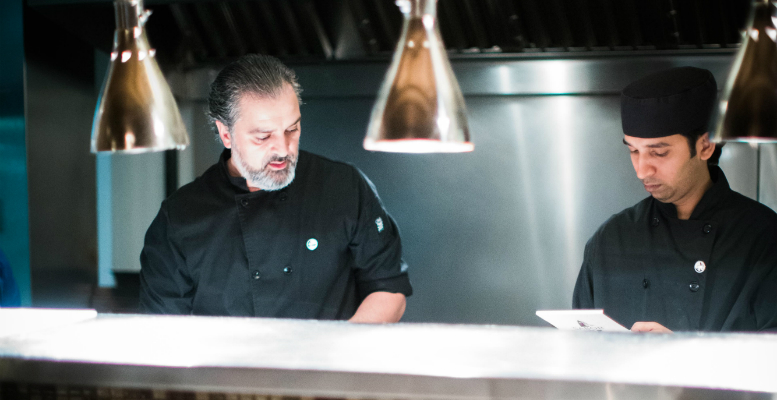 Describing their restaurants as Spanish and Portuguese (Iberian) with a European undertone, Mena and Oliveira have been working hard to create a sustainable seafood menu (they became OceanWise certified in 2015), something that isn’t always an easy task in a landlocked province such as Alberta. They also work with Edmonton’s downtown farmers’ market and other local producers to bring in locally sourced fresh ingredients, as well as collaborating on dinners in support of non-profit organizations like the Bissell Centre. And, as a nod to Mena’s musical background, they feature local musicians several nights a week, giving classically trained musicians a home to perform at when they aren’t touring or teaching.

“Many of the people we bring in also play in bands I perform with, so for special occasions I’ll pick up a mic and sing a tune or two,” says Mena.

When it comes to putting together the essential ingredients for success in the restaurant industry, Mena and Oliveira have a clear strategy and believe their passion and love for culture and food will be the fuel that drives them to additional achievements.

“Quality, consistency, and kindness—those are the most important ingredients,” says Oliveira. “There is definitely something to be said for location and atmosphere, but if you don’t offer a quality product, presented consistently from one visit to the next by friendly, helpful staff, guests won’t return. Some of the best restaurants in the world have been in the middle of nowhere or holes in the wall—but they offer amazing food and service which is always worth travelling for.”

Mena agrees, using an interesting metaphor to help explain the joys — and challenges — of the restaurant business.

“Be prepared for a lot of work. Owning a restaurant isn’t like having a dinner party—it’s like having a child that grows up very slowly. It will need your constant attention, wake you up unexpectedly in the middle of the night with things like a flooded toilet, throw tantrums that you don’t know how to resolve until days later, and change your life completely. But, if you carefully nurture it, give it the tools it needs, and the right diet, it will grow strong and independent and eventually you can leave it and take a much-needed vacation or get a break.”