One of our first clients at The Fifteen Group originally contacted us as they were having challenges with making strong profits on strong sales. As we quickly discovered, this was in large part because of difficulty in controlling labour costs. It wasn’t because they weren’t good at managing labour efficiency; it was because none of their employees ever left.

This particular operation had been in business for about 10 years and had a very strong family-style culture within the organization. The staff all loved working there and the owner wanted to take care of his team, which is great!

On each staff member’s anniversary review, he would them a $0.50 raise, and often more if they were a very valuable member of the team. But no one ever left their employment and his kitchen labour cost was out of control.

When he opened the restaurant over a decade ago, minimum wage was about $8 per hour and the average kitchen wage in his restaurant was about $10. So every year, his kitchen wages would go up by five per cent, or $0.50 per person raise on average wage of $10.

Over the 10 years that he had been in business, his kitchen labour went from 15 per cent of sales to almost 22 per cent, and this amounted to a decrease in profitability by $135,000 over the 10 years on the same sales volumes.

Now, you could say that as people are more senior and years go by they get more efficient and better at their job, and therefore are worth the wage increases. But there is a maximum to the efficiency that someone can produce in the kitchen, whether they are a dishwasher or a senior line cook.

The bottom line is, people need to move on, even some good people. Ideally, the best people can move on within your organization to more senior roles but obviously not everyone can be top of the pyramid. But as employees improve, receive raises, and time goes on, the more qualified and expensive roles at the top need to leave the company and the less expensive inexperienced roles need to fill in at the bottom to keep the pay cycle rotating. 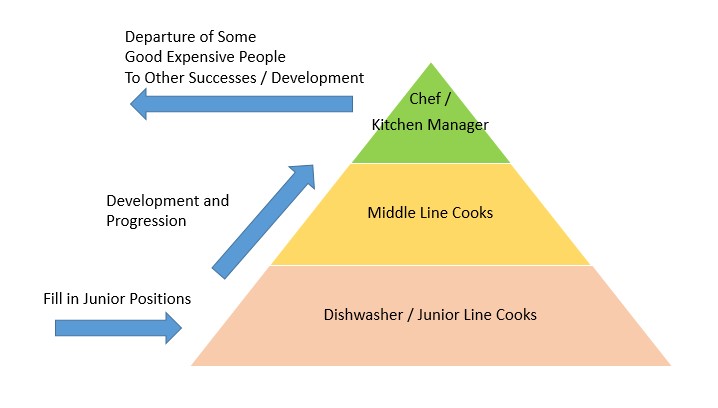 So how do you make this work for your company?

Very simply, raises need to be justified. You can’t just give everyone a five per cent increase each year because you want to. People need to either justify a raise because they have improved and are more efficient in their role, or they need to have progressed to a more senior role. But an employee doing the same job, at the same pace, with the same diligence, cannot keep getting raises (apart from Cost of Living increases). Unfortunately without a raise they might move on and leave your organization. Some would argue that this type of strategy would result in exorbitant training costs that will cost as much as the increased wages, but I would argue differently.

I would agree, however, that training becomes an integral part of your organizational structure. A good training program, though, does not have to be overly expensive as you should be training at the junior positions, which are typically easier and cost less to train (in training time commitment). Having diligent and structured training programs in your operation to ensure that the training of the new hires is efficient and properly executed is key.

At the end of the day, you cannot fear employee turnover – not even good employee turnover. It is a natural business progression. Not everyone in your company can progress to the top of the pyramid – and that’s okay – that’s what helps make you profitable.

David Hopkins started his career in restaurant management in 1990. He has held various senior management positions in the industry, including within some of Toronto’s top restaurant companies. In 1997, David joined SIR Corp. to head-up the financial/accounting department of one of their most profitable divisions, Signature Restaurants. In 2001, David formed The Fifteen Group Inc., a consulting company dedicated to maximizing restaurant profits through effective sales generation and disciplined cost control management. The Fifteen Group’s clients range from owner/operated establishments to multi-unit restaurant corporations. You can reach David at dhopkins@thefifteengroup.com.