Trending seafood and fish dishes are giving many Canadians cause to dine out. Some of these items, like poke bowls and seafood boils, hail from different U.S. regions, while others such as conservas originate from farther regions of the world.

What’s driving fish and seafood innovation? One catalyst is consumers’ increasing need for better-for-you menu options. Consumers rank seafood as the second most-healthy protein on menus, falling just behind chicken but well above beef and pork in health perception, according to Technomic’s Canadian Centre of the Plate Consumer Trend Report. Seafood’s health perception is even higher than fully vegetarian and vegan options. In fact, only three per cent of consumers believe seafood is unhealthy.

Another driver is consumers’ demand for fresh, quality ingredients during restaurant experiences, which fish and seafood often satisfy. Freshness is the leading attribute that impacts seafood purchases: 87 per cent of consumers are most likely to buy seafood that’s described as fresh at restaurants and half are willing to pay more for it (50 per cent). Seafood described as natural follows closely beyond fresh, with 81 per cent saying they’re more likely to buy natural seafood. Local, wild-caught and sustainable are also valuable seafood menu callouts because these attributes tie back closely with transparent, eco-friendly practices and quality products. In fact, 75 per cent of seafood consumers are more likely to buy seafood that is locally sourced and 29 per cent are willing to pay more for this attribute, according to Technomic.

Now let’s look at what fish and seafood dishes are on-trend, including presently popular and more emerging trends.

Although not new to menus, menu development around poke continues to grow as concepts aim to offer their own unique variation of the dish. Poke is a Hawaiian seafood salad typically consisting of cubed ahi or yellowfin tuna served in a bowl over rice or greens with sauces and toppings. Its many appealing attributes for consumers include a light and refreshing taste and texture and striking bright reddish-pink color, while operators benefit from poke’s adaptability to multiple mealparts and ethnic influences. 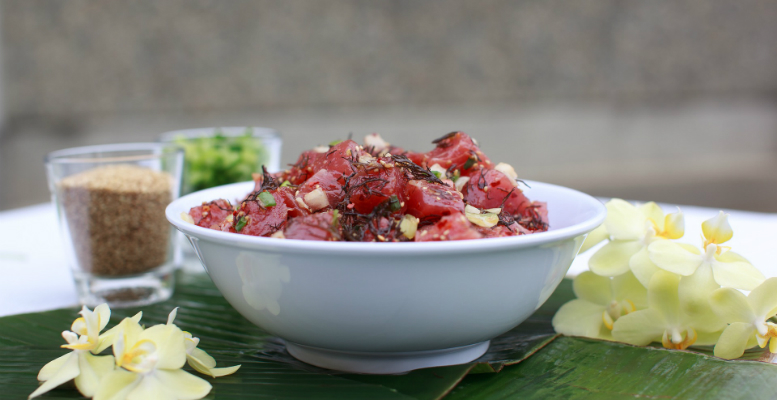 For instance, Moxie’s Grill & Bar serves Tuna Poke in a Jar as a shareable appetizer, and Burgoo in Vancouver also serves a tuna poke starter with tortilla chips. However, Quebec chain Sushi Taxi stars poke as the primary protein in California- and Hawaiian-inspired entree bowls, which come with other ingredients such as quinoa, rice, avocado and edamame.

A challenge for operators offering poke is properly addressing food safety concerns guests may have with this raw dish. A simple yet effective tactic many poke operators are using to build trust with customers is to incorporate quality-focused buzzwords in advertising or menu callouts. For instance, Poke Guys promotes on its website that it is “Toronto’s premium poke” destination while Pacific Poke in Vancouver publicizes locally sourced poke in the brand’s name.

New takes on lobster handhelds are evolving from the popular lobster roll sandwich of New England and the Maritime provinces. From coast to coast, operators are finding other portable formats in which to feature lobster, including wraps and tacos. Presse Cafe wraps lobster, avocado, mango, sweet peppers and baby spinach in a lemon and coriander tortilla, while Baton Rouge Steakhouse & Bar pairs lobster meat with red bell pepper, lettuce, jalapeno, cilantro, radish, housemade lobster mayo and a ginger-lime dressing in a soft taco format.

An upside to offering lobster handhelds is that operators can raise the price point for handhelds featuring this premium meat. Technomic’s MenuMonitor shows the average price of sandwiches on Canadian menus is $9.53, whereas sandwiches made with lobster average $17.09; that’s a 79.3-per-cent markup. Similarly, the average price of a taco is $9.97, while tacos with lobster average $12.37—a 24- per-cent markup. This shows that lobster can generate greater financial gains for operators as a handheld ingredient compared to other proteins and fillings.

Originating in the Gulf Coast region of the U.S., seafood boils (pronounced “berl” by locals in New Orleans) are meeting consumers’ need for customizable and interactive dining experiences. These meals typically include a choice of seafood accented with veggies, seasonings and sauces, all of which are boiled and served in a bag to be eaten with hands instead of utensils (although mallets are sometimes provided). Plastic bibs and gloves are usually provided to help keep the dining experience as mess-free as possible. The cost of the meal is typically determined by the price per pound of the selected seafood.

At Ontario’s L.A. Boil Seafood chain, guests choose from a seafood selection that includes crawfish, Dungeness crab, lobster, king crab legs, mussels and shrimp. The seafood can be complemented with one of four flavours (Cajun, lemon pepper, butter or a mix of all three) and choice of spice level, with options ranging from non-spicy to “I-can’t-feel-my-mouth” extreme spicy. Other meal add-ons include sausage, corn on the cob, potatoes, zucchini and mushroom.

The Captain’s Boil is another seafood boil chain that has won over Canadians. While the menu and format is similar to L.A. Boil Seafood, distinctions include a garlic sauce instead of butter option and okra and broccoli add-ons. The brand currently operates more than 20 units across the country and is targeting at least seven more locations to open in the coming months.

Tuna tataki is gearing up to be the new tuna poke, as it also features either ahi or yellowfin tuna and has a similar refreshing appeal as poke. The Japanese dish is typically thinly sliced and lightly seared tuna served rare with a citrus-base soy sauce; other tataki preparations may substitute salmon or beef for tuna.

Hailing from Spain and France, conservas (or conserved seafood) are hand-packed tins of high-quality specialty foods preserved in cans or jars with oil, brine or sauce. While conservas can include anything from olives to peppers, operators are exploring offering high-end canned fish and seafood—including canned tuna belly, tuna loins, sardines, octopus and mussels, among others—as a delicacy on menus. These items are being presented on the table in the original tin packaging as authentic appetizers, often served alongside chips or bread.

Toronto’s Bar Raval tapas bar is helping to develop this trend by adding conservas to the menu. It serves items like mussels and smoked mackerel with rosemary oil conservas alongside cured meats and other tapas. Ox Bar de Tapas in Calgary followed suit with a dinner menu that includes conservas ranging from $18 to $30. Offerings are octopus in olive oil, stuffed squid in its own ink, razor clams in brine and scallops in Galician sauce.

Fish and seafood dishes will continue to draw in guests looking for above-average meals as long as operators are able to emphasize the quality and healthy attributes of these offerings. Freshness will remain top of mind for consumers considering ordering fish or seafood, and sourcing transparency will also play a larger role in the appeal of these items as eco-friendly and humane practices becomes increasingly important to guests. As trends evolve, further innovation could include new global influences such as Filipino pinakbet (mixed vegetables steamed in fish or shrimp sauce), as well as interesting, novel preparations like fish skewers.

Laura McGuire is Content Director at Technomic in Chicago. Technomic provides clients with the facts, insights and consulting support they need to enhance their business strategies, decisions and results. Its services include publications and digital products, as well as proprietary studies and ongoing research on all aspects of the food industry. Visit www.technomic.com.