Restaurant point-of-sale (POS) solutions have evolved dramatically over the last few years. They have moved well beyond the traditional model of expensive, propriety hardware, costly installation fees, and hefty annual payments for upgrades and maintenance contracts that only large restaurants could afford.

The introduction of tablets has been truly disruptive, making it possible for restaurants of any size to afford a POS system. Initially restaurant operators thought using an off-the-shelf iPad for business operations was just a gimmick. But today, tablets are accepted worldwide as part of a cost-effective POS hardware solution that saves thousands of dollars for each terminal compared to the older systems.

“When my server crashed on my old POS system, it was going to cost $8,000 to replace and update the system,” says Joe Magoonaugh, owner of The Ogden, a full-service dining room and bar. That’s when he decided to go with a new tablet-based system. “You don’t have to put $10,000 – $20,000 up front for a POS, and it is easy to get up and running.”

Some older POS companies have tried to tailor their retail POS solutions to a restaurant environment. Some have done so more successfully than others, but there is a world of difference between taking an order for a steak and ringing up a pair of jeans. There are also functionalities that are just not available on retail solutions, like taking tips, and these take considerable technical design expertise to be programmed into a new POS app that works well in a restaurant.

A few new POS companies took on the challenge of pioneering tablet-based solutions designed from the ground up specifically for restaurants to capture the work flows that are unique to this industry. For example, combining bills for separate patrons can be time consuming and cumbersome for wait staff. TouchBistro developed a patented design that takes just a simple swipe of the finger across the iPad to complete the task.

“Dividing a bill used to take my wait staff up to 30 minutes,” says Tony Geer, co-owner of The Ledford House, a fine dining restaurant. “Now it takes them 30 seconds with TouchBistro, and they can pay a lot more attention to their customers.”

From quick service restaurants (QSR) and coffee shops to full service restaurants (FSR), each one is unique. While some may have just opened their doors, others may be well established; some may use a traditional POS while others use no POS at all. Ultimately, there are multiple factors that impact a restaurant’s decision to implement mobile technology.

The good news is that a tablet-based solution, in addition to being much less costly than a fixed hardware system, allows for either a stationary or mobile model. This offers much more flexibility to restaurant owners who may want to initially implement the POS with an iPad placed at reception or the counter and maybe another one at the server station. Then later, iPad Minis can be added for servers to enter orders and payments right at tableside, eliminating a lot of the usual running back and forth as well as double entry errors, while simultaneously increasing table turns.

“We have dramatically increased our sales in the last two months since we installed tableside ordering and payments,” says Tom Marcellino, co-owner of Calzolaio Pasta Company. “I’ve estimated it saves a minimum of 15 minutes to half an hour per table.”

When the POS solution is connected to the cloud and offered on a monthly subscription based on the number of terminals deployed, it’s easy to add tablets and download the POS application without expensive and time-consuming installation fees. This software-as-a-service (SaaS) approach can provide the additional advantage of regular updates streamed to the POS from the cloud at no additional cost. 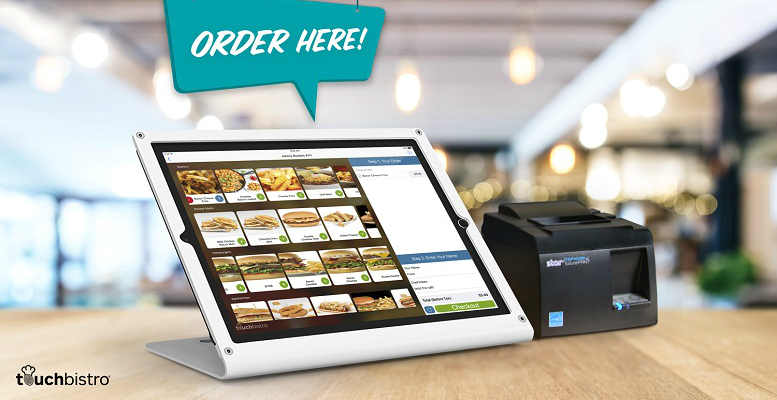 The newest POS technology to burst on the scene is the self-ordering kiosk. The surge in interest initially stemmed from a huge concern about labor costs with increases planned for the minimum wage. Restaurateurs wanted to be able to provide good service with less staff.

While self-ordering is not a good fit for a FSR, the self-serve concept works well in QSRs, fast casual restaurants, or other venues set up with line service like coffee shops or cafeterias.

Some customers can experience “line anxiety” when people are waiting behind them to order, so they may pass over upsell options to place their orders quicker, or because the menus on the wall are confusing and hard to read. With a well-designed kiosk, line anxiety is eliminated, and placing an order is easy. In addition, since customers are guided through tempting photos of items they may want to add to their burger, or maybe an extra coffee flavor shot or dessert, kiosks have been shown to increase the average ticket size.

“Our average guest check through the kiosk is nearly two times the average placed with a waiter. Since it is so easy to add items on the kiosk, guests add avocado or bacon, and may also see other options to add to the order that they may not have seen on a paper menu,” says Colleen Caulliez, co-owner of Lea French Street Food. “Self-ordering is a big part of our profitability. We can focus on service and our food, rather than ordering or accuracy.”

Mobile payments now and in the future

Mobile payments or digital wallets have been slow to catch on with consumers, even though EMV (chip card technology) and NFC (near field communications) has been available in Canada for years. As payment processors offer more equipment that is NFC capable, and people upgrade to their next phones – virtually all of which are NFC capable – we will likely see more consumer uptake in mobile payments. This is particularly true with younger generations who never leave home without their phones, but don’t seem to ever bring a wallet with them.

Apple Pay and Android Pay are both available in Canada. Generally, digital wallets are limited to transactions below $100, which also limits the types of restaurants where they would be used.

It’s all about what the operator wants to accomplish. When choosing a POS, the first thing a restaurateur needs to do is determine his primary drivers: cost, service, customer experience, or possibly streamlining specific operations or enticing a certain demographic. Then research should be done to determine which POS solution will best fulfill those objectives now, and at the same time has a track record of continually and seamlessly incorporating the latest technical innovations.

Alex Barrotti, founder and CEO of TouchBistro, embarked on the development of a restaurant mobile point-of-sale app in 2010 after watching the inefficiency of patio waiters running indoors and back outside to deliver orders and process payments. The TouchBistro iPad POS solution for restaurants was launched in 2011. Today TouchBistro is the top POS app in 37 countries on the Apple App Store. The app is frequently updated with new features thanks to the wealth of feedback regularly received from nearly 10,000 deployments worldwide.