Because of these drivers, menus have had to evolve and have changed in a number of key ways over the past 10 years. To demonstrate this hypothesis, fsSTRATEGY recently conducted an analysis of the top 10 revenue-producing, full-service chains in Canada,[1] comparing their menus in 2008 and 2017 to see what difference 10 years has made. We examined menu sections, cooking methods, proteins, menu claims and pricing.

The average number of items on the menus of the 10 chains increased nine per cent (the addition of an average of 5.3 items per chain) since 2008. Although the relative importance of menu categories has not changed, lessons can be learned by examining individual menu category counts.

Interestingly, while main courses command the largest part of the menu, the average number of main course items has not changed in 10 years. Many chains are now calling appetizers “shareables.” Today, the appetizer category plays a slightly different role on the menu, providing options for lighter and shared dining, reflecting consumer demand for healthier options and portions, and a more social dining experience. The number of burgers and sandwiches on the top 10 chains’ menus has increased due to demand for hand-held foods (influenced by competition with quick-service restaurants) and consumer demand for value-priced options. Given flat traffic counts, operators generally don’t want to limit consumers by exceeding their price expectations.

The number of side order options has increased in response to consumer demand for greater customization capability. The research indicates the number of items in the pasta/bowls category has not changed appreciably; however, in 2008 the majority of items in this category were pastas. In 2017, this category includes a greater number of bowls with ethnic influences, reflecting greater consumer interest in ethnic foods and healthier options. The average number of salads has declined. In many cases, menus don’t promote side salads now (side salads may be available off-menu). The salad category focuses on meal salads, again reflecting consumer demand for healthier options and reflecting operators’ wishes to drive higher average checks.

Grilled, deep-fried, baked and pan/stir fried and roasted remain the most popular methods of cooking.

Most likely, when you began reading this article, you expected chicken to continue to be the most popular full-service restaurant menu protein. You were correct.

Chicken owns 36 per cent of the average menu (to some extent due to the presence of two chicken chains in the top 10 restaurants and the number of variations available on chicken dishes in all 10 restaurants. In general, the relative rank of protein popularity has not changed in 10 years. However, the percentage menu share for traditional proteins (chicken, beef, seafood and pork) has declined by seven per cent as use of cheese and other proteins increases. The overall increase in protein menu mentions reflects an increase in the number of menu items and the inclusion of a greater number of multiple proteins in menu items (e.g., a greater number of chicken-and-rib combos, more use of bacon with other proteins). Cheese is the protein with the greatest percentage growth (for a single item) owing to the increase in the number of meal salads (which often include goat cheese) and appetizers using cheese.

The large percentage growth of other proteins is misleading as the numbers for each other protein are very small compared to the proteins listed. In our research, fsSTRATEGY noticed a few more uses of eggs on the menu (i.e., on top of burgers and in meal salads); however, turkey, veal, lamb and game continue to struggle in terms of gaining traction on menus. 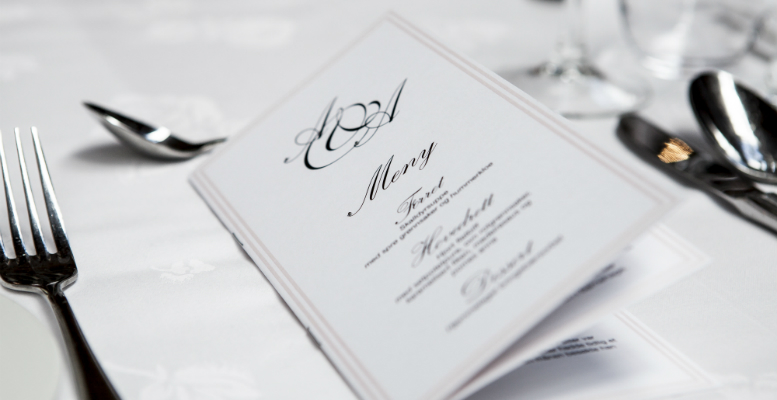 In 2008, full-service restaurant menus made a number of claims including reference to light, low fat, low carb and trans fat free menu items. Fad diets played an important role in the consumer’s mind. In 2017, fresh and made in-house are the leading menu claims, reflecting more recent consumer demand for “real” food.

Interestingly, menus appear to have fewer claims and the use of the term fresh appears to have declined since 2008. Menu designers appear to be focusing on winning through ingredient differentiation rather than being part of the latest health craze. This change in claims is likely related, in part, to recent menu labeling laws requiring chain restaurants to include calorie counts on menus. The emergence of the claim made-in-house signifies the end of a pendulum swing from full scratch production in the early 1960s to extensive use of convenience products by the 1990’s. The latter was in response to the growing cost of labour and shortage of skilled culinarians. As consumers demand more “real” food, in-house production of certain menu items or ingredients is perceived as a strategic advantage, despite the associated additional labour cost.

In the past 10 years, starter prices have experienced compound average annual growth of 3.9 per cent (above inflation), likely due in part to our observation that many starters are now either shared or substitutes for main course items, reflecting lighter and more social dining. Entrée prices have experience compound average annual growth of 3.5 per cent (above inflation), likely reflecting pressure to reduce food costs due to higher labour costs and occupancy costs. Remembering that chicken is the most used protein, when price increases are compared to increases in chicken costs, operators are clearly leveraging chicken to improve revenues and margins. Such price increases have been needed to balance against increases in beef and pork costs. The fact remains that growing revenue through price increases is highly challenging. Stealing market share from competitors is the secret to revenue growth and many operators are attempting to do so through menu ingredient and presentation differentiation.

Interestingly, compound average annual dessert price growth has only been 0.5 per cent, likely due in part to the introduction of light dessert bites. Operators consider gaining many sales of low priced dessert items better than very limited sales of higher priced desserts as consumers watch their spending carefully. Desserts sales are, in reality, gravy for the operator. Gross margin on desserts drops right to the bottom line, other than the fact that dessert sales may extend table times and therefore table turns. Out of necessity, desserts need to be quick to prepare and serve, create a wow factor with the guest and be consumed relatively quickly.

The future of the menu

So where does the menu go from here? fsSTRATEGY suggests that menus in the next five years will continue to evolve, driven by a number of factors.

Building a restaurant menu has truly become a science. Operators must have a detailed understanding of how their menu is performing and what it takes to differentiate their menu to steal market share and optimize revenues and margins from their client base.

Geoff Wilson is a Principal with fsSTRATEGY Inc. a niche consulting firm based in Toronto focused on assisting foodservice operators to enhance customer satisfaction, revenues and return on investment. For more information visit www.fsSTRATEGY.com.