When I named our company The Fifteen Group in 2001, it was because we believed that any decent restaurant should make at least 15 per cent profit on sales (or potentially more, under the right circumstances). We still stand by that viewpoint today, however if I were naming the company now, it might be more accurate to replace ’15’ with ‘11’ or ‘12’. Circumstances in the Canadian marketplace have made it that much tougher to reach the profit numbers that were achievable in 2001. Why is this? 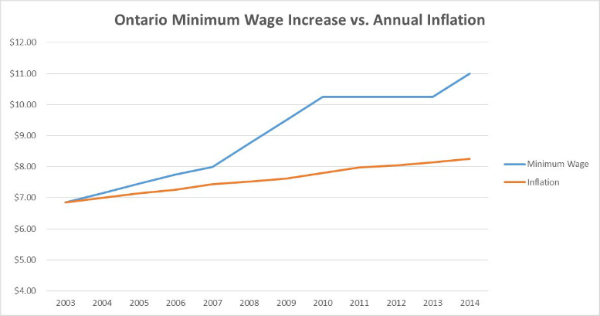 While this is only minimum wage and there are only a handful of restaurant employees that work at minimum wage, all other wages are driven by that mark. It is hard to pay a good line cook $12.00/hour when the dishwasher is making $11.25/hour.

Clearly, labour cost is definitely an issue. But that is not the only challenge we are currently facing. Product costs have recently risen on the whole much faster than inflation, especially in certain categories – most notably, meat. The graph below shows the price of various meats over the last five years.

For all of these categories, the average cost has increased by over 35 per cent over a five-year period.

Now, this all does not necessarily signal doom and gloom. These cost increases that the business owners are experiencing do get passed on to the guest. The steak that was being sold for $30 in 2003 is a lot pricier in most restaurants today than the $37 that just inflationary increases would bring it to. But increasing prices to pass on these costs is difficult and takes time to filter through to guest perception. Just because the cost of beef went up 20 per cent in a year, that doesn’t mean that the guest understands why they are paying that much more for their steak in a restaurant.

All the more reason why restaurant owners and operators need to be in complete control of the two primary cost centers of a restaurant – labour cost and product cost. Diligent management of these areas with proper scheduling tools, menu engineering tools and inventory control tools can help keep those numbers as tight as they can be while still delivering the exceptional guest experience you need to drive sales.

Here are some quick tips to ensure that you are getting as close to that 15 per cent profit on sales level as you can (or even more):

David Hopkins started his career in restaurant management in 1990. He has held various senior management positions in the industry, including within some of Toronto’s top restaurant companies. In 1997, David joined SIR Corp. to head-up the financial/accounting department of one of their most profitable divisions, Signature Restaurants. In 2001, David formed The Fifteen Group Inc., a consulting company dedicated to maximizing restaurant profits through effective sales generation and disciplined cost control management. The Fifteen Group’s clients range from owner/operated establishments to multi-unit restaurant corporations. You can reach David at dhopkins@thefifteengroup.com.

One thought on “Is your restaurant making at least 15 per cent profit?”