From the spring 2018 issue of Canadian Restaurant & Foodservice News

Like some who espouse a raw food, vegan or vegetarian lifestyle today, chef Doug McNish wasn’t always such a compassionate culinarian. Once a confirmed carnivore who happily grilled up steaks for hungry patrons, McNish has since become a vegan with a vision, opening a successful meat-free eatery in Toronto and convincing doubters that eating a plant-based diet can also be major league cool.

McNish is a founding partner of Parkdale’s Mythology Diner, which opened in early December last year. While his previous venture, Public Kitchen, recently closed, Mythology continues to turn the tables on the old-school diner experience by offering veganized comfort food classics that can cajole even the staunchest meat-eater into craving plant-based foods. From an egg-free eggs Benedict to vegan Viennese Salisbury Steak to the meat-free, deli-inspired Reubenator, all of McNish’s recipes are made with attention to nutritious detail, flavour and a healthy dollop of good humour.

After discovering a passion for cooking at age 15 while working in the kitchen of a British pub, McNish later honed his skills and education in the George Brown College culinary program and then apprenticed for two years at a private country club. Subsequent work experience included stints at Oliver and Bonacini’s Jump and the Air Canada Centre in his hometown of Toronto.

“I fell in love with cooking because of the honest hard work, creativity, teamwork and the ability to make people happy by feeding them,” says McNish. “I knew I would never be out of a job, because everyone has to eat, right?”

McNish did not set out to become a vegan chef, or even a vegan customer. His transition from an omnivorous diet to a plant-based one was the result of a friend showing him an emotionally jarring animal rights video, along with his increasing desire to lose weight and adopt a healthier lifestyle. Over the course of several months of clean, vegan eating, he started feeling better, lost a considerable amount of weight and began learning more about the environment and its relationship to food. He became a vegan more than 13 years ago.

“I have worn many hats and chopped many bunches of parsley to get to where I am at today,” McNish says with an easy laugh. “I decided to become an entrepreneur after realizing that enough was enough, and that I was the one who needed to call the shots once and for all.” 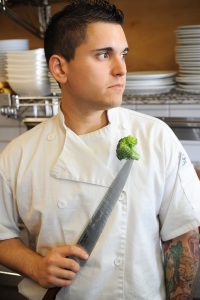 While his two foodservice businesses in Toronto have unique atmospheres and menus, they have plenty of commonalities, not the least of which is the fact that both are focused on vegan dishes.

“My Public Kitchen definitely focused more on organic and healthy meals, whereas my diner Mythology — while still vegan of course — is more of a place to come for an amazing comfort meal with a cold beer or wine. Yes! We have wine on tap! Both business still focus on paying staff proper wages and creating a balance of work/life and a work environment friendly to everyone in every walk of life, regardless of sex, gender or race.”

As a vegan restaurateur, McNish says he is most passionate about understanding where food comes from and who is producing it. He is also focused on providing the best ingredients and service to his clientele at both dining spaces.

“While it may sometimes be impossible to know every single ingredient and every single producer, understanding the bulk of it and the important items are key,” says McNish. “I do love supporting the local economy of course, and wish more people would buy what is grown, or at least processed, in Ontario and surrounding regions.”

“I would also say that I am customer-service oriented. Without the customer, there is nothing, and I feel like people forget this all too often. My philosophy about food is similar to that of the customer. We must put the ingredient first. This doesn’t necessarily mean that every single ingredient has to be the most expensive, rather that the ingredient works in whatever it is you are creating.”

Naturally, vegan cooking has its own set of challenges, along with all of the usual hurdles of opening and running a successful restaurant. But he admits that it doesn’t have to be as difficult as some might think.

“You don’t need a new set of cooking techniques to create vegan cuisine. It’s everything that we already know. The searing, the roasting — all of those things work the exact same way. For me it was learning about the ingredients, and how they react to each other. You know, applying traditional cooking methods to them works as well, if not better, than traditional cuisine.”

McNish enjoys being able to put his classical culinary training to the test every day, not only as a chef but also as a publisher of three hot-selling vegan and raw food cookbooks. He is also becoming increasingly comfortable and popular in front of the cameras, with dozens of entertaining segments on local daytime television under his belt, and plans to expand his career in that direction.

“I love being able to teach my recipes and spread my awareness of vegan living and food, so to have my own cooking show route is 100 per cent natural and in my cards.”

As for what inspires and motivates him to show up each day “and give 110 per cent,” McNish believes that a sincere desire in wanting to be the best at what he does is all the motivation he needs.

“Working in a restaurant is like no other atmosphere on the face of the planet. Yes, it can be stressful and yes, it can be a lot of work, but it can also be the most rewarding job out there. You get to be creative every single day, you get to work with new product and people all the time, and you never stop learning. These are just a few of the reasons I get up every day and put on my whites!”